Hold on to your seats, this is going to be a long one. Week 4 of the #BlackBlogsMatter Challenge has come with a lot of different topics, as always. Head over to @BlckBlgsMttr twitter account to find out about all the topics and stay up to date on the authors sharing their flavors. I’m going to be addressing a few topics in this one post because it’s Sunday and it’s time to catch up.

You’re showing your opporocoonities: I tweeted this out on Feb 21st and I stand by what it says, but especially the, “Y’all get more annoying as the day goes on” part. It doesn’t specify if I’m discussing white people, Black people, or anyone else on the spectrum and that’s because it applies to everyone! Once I got a little more background about this story, I found out that one of the black men on stage, Tyronne Stoudemire, the vice president of global diversity for Hyatt Corporation was actually the person who created this “great” idea and the Governor, Bruce Rauner, went along with it.

Let’s get something straight, the Governor is not being let off the hook because some type of common sense would play a roll in this situation, but we know most people don’t have or can’t comprehend that God-given trait. But, what makes this the absolute worse is that a BLACK MAN created this “activity” of pouring a glass full of white milk to represent the White Man and using some heresy chocolate syrup to represent diversity. Stirring them together, we get “Inclusion”.

Then you have tweedle dee and tweedle dumb clapping at the governor taking a “big gup” of inclusion. Listen to me, come a little closer … STOP PRETENDING THAT WE HAVE AN EASY FIX FOR RACISM, SEXISM, WORKPLACE DIVERSITY, AND INCLUSION, OR WHATEVER YOU WANT TO CALL IT! If it was this easy, the problems we have in America would have been fixed, but instead in the year 2017 y’all voted …. you know what nope, never mind, it’s Sunday.

Next topic for discussion NYU – To sum it up, a student went to get food at the cafe and found a “Black History Month Menu” that consists of ribs, collard greens, mac n cheese, red kool-aid, and watermelon flavored water. I have a few different opinions on this topic. First of all, I went to the young ladies facebook page and I must say, it seems like a good amount of white people feel they can call this young lady, “dumb, arrogant, little race baiting ignoramus” and so many more horrible things. Don’t clap yet Black people, a few of y’all are on there saying some horrible things too. I love that she decided to speak up on something, but I do believe she’s a little “too woke” on this subject. 2 people who were doing their jobs have been fired. I’m not saying she doesn’t have the right to feel the way she does, maybe I’m not “woke” enough, but I would have been glad to eat the food, especially if it was prepared by people who really know what they are doing in the kitchen. Every year, restaurants, schools, and other places feature a menu, but they also do it for other cultures as well. These are items black people eat and it’s easy items for them to fix. How would you have felt if they made a steak dinner for Black History Month? They could have kept that watermelon water though. For me, I think I see this as a lesson in which we have to pick and choose our battles and I don’t believe this was a battle at all. We are all learning what it means to be “woke”, we are learning the #Power of Black Twitter, we are learning about #Activism, we have to determine what is hurting us and what is helping us, as the Black Community. My judgment of this could be wrong and that is ok, I will learn from it and continue on.

February 14 was a horrible day in Florida and it was felt around the world. I had no idea we’ve had so many school shootings in 2018. It hit home when local schools in my area had multiple students arrested or suspended that next week for bringing a gun or talking about doing horrible things. I stand with these students trying to make a change, I hope they are able to put the NRA and the government on their asses. However, I can’t stop thinking about the fact that when Black kids are trying to make a change and trying to do the exact same type of thing, even if it’s not because of a school shooting, how we silence them and call them thugs. We put the blame on them for problems they didn’t even create. We don’t give them the same opportunities these kids are being given, simply because they are Black. I think #BlackBlogsMatter is allowing more voices to be heard all over the world. You’re not just reading the experiences of Black Men and Women because many times we have to speak for and with our children too. We have to be the backbone for them because we know how cruel the world can be and how they will get labeled just by their names alone.

The N Word discussion is here on Day 25 of the #BlackBlogsMatter Challenge and I still can’t comprehend how this is still up for debate. YOU CAN’T SAY IT! Yes, I think rappers/pop culture are doing a horrible job with the word. Yes, I think Black people should think about what we are saying before it comes out of our mouth. But that doesn’t give you, a person who has no idea what it is like to be an N word, to walk a day in our shoes, to live life constantly in fear of a person with white skin. I am tired of explaining this to y’all, WE as a community are tired of explaining this to y’all.

I thought long and hard about this post, so many things I wanted to say, but I don’t know if I have the energy to address them and that is the sad part. We are forced to squeeze our thoughts into one month out of the year, not even a full month, mind you. We are given the “green light” by others who are not POC for this month to discuss anything, as long as they are able to say how uncomfortable it makes them, for us to discuss it. Even in this month, we can’t be 100% honest about certain things, because we are not being fair to white people. I’m tired. This month has made me emotionally tired. Trying to find my voice to speak out, has made me tired. It’s day 25 of 28 in February. We have 3 more days to speak out before we are once again silenced until next year and #BlackBlogsMatter won’t stand for it. So I’ll be tired. Because so many people have expressed how our blogs have helped them see some of the things we go through in a better light. Because I know every white person isn’t against us and want to help, listen, and learn. Because I know this will make a difference for the Black Children who are trying to make a small difference around the world and may feel that no one stands with them. Because Ferguson doesn’t have enough people standing with them. Because our grandparents, great-grandparents, parents, aunts, uncles, cousins had to stand for themselves and they created change. 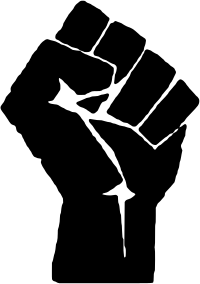